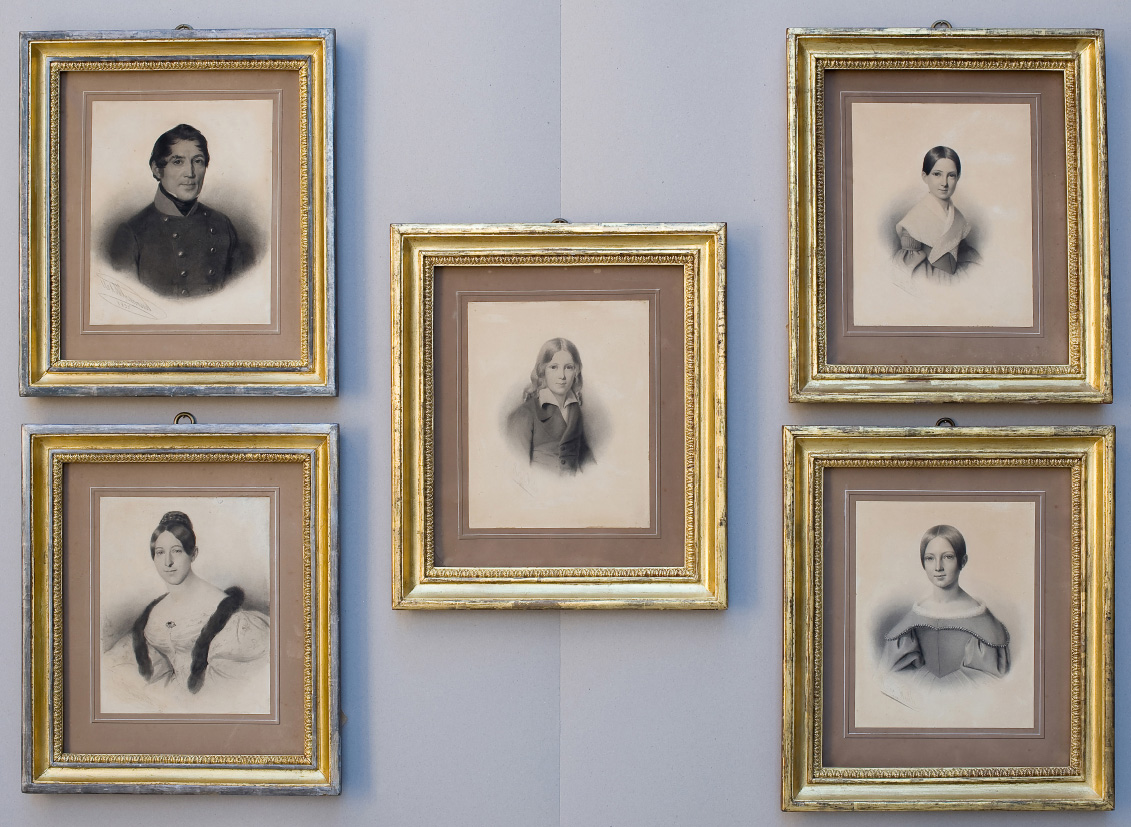 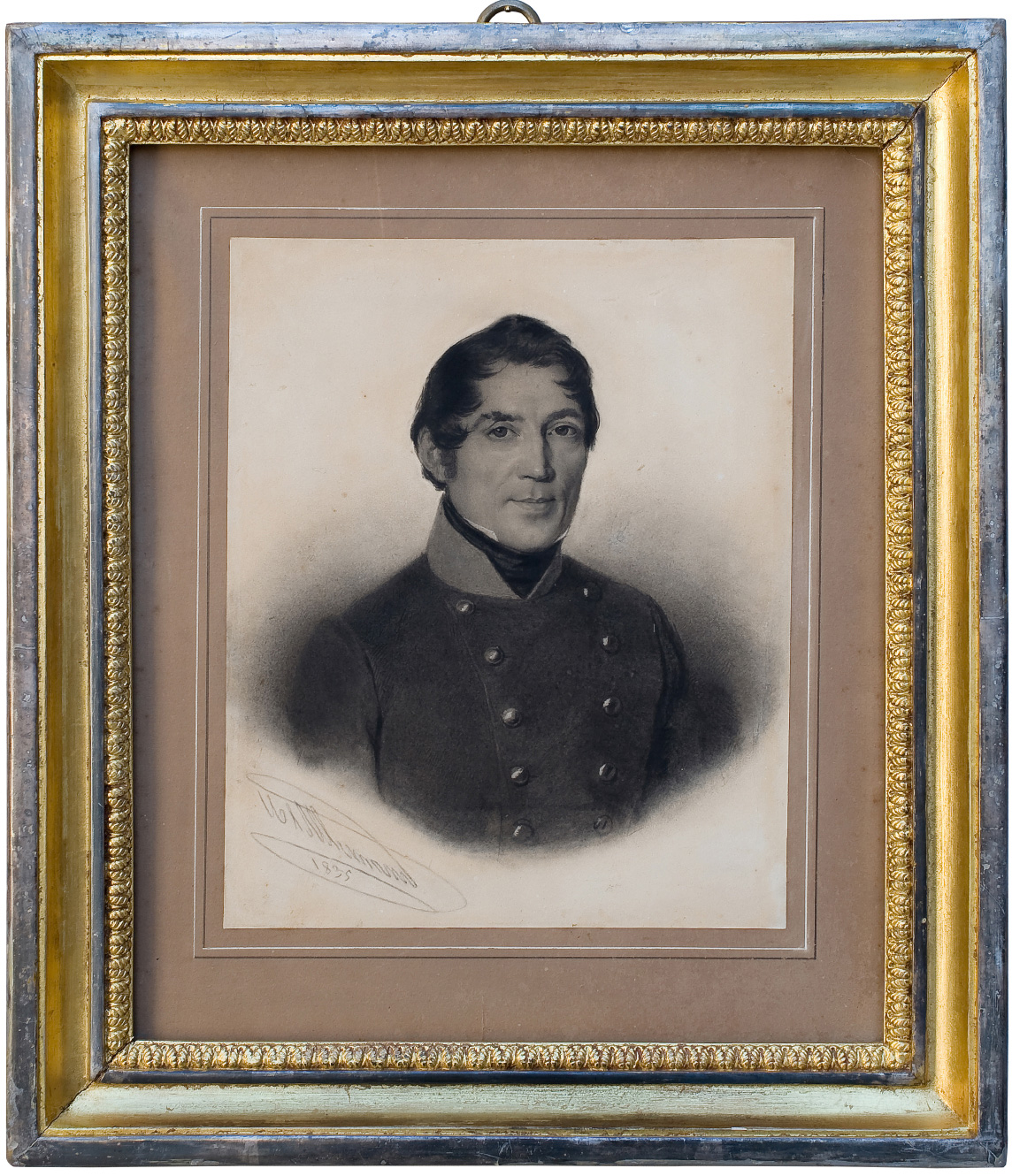 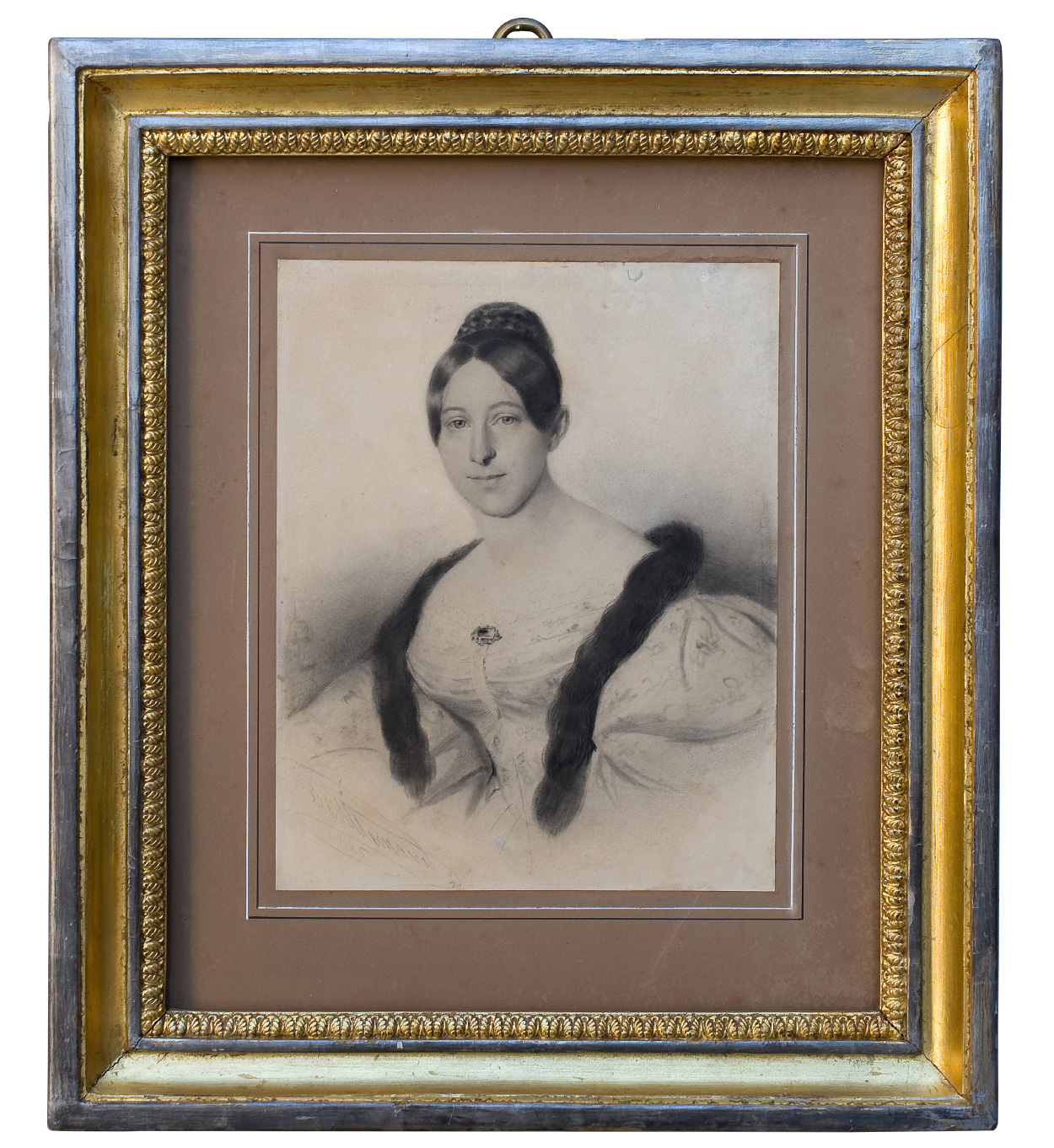 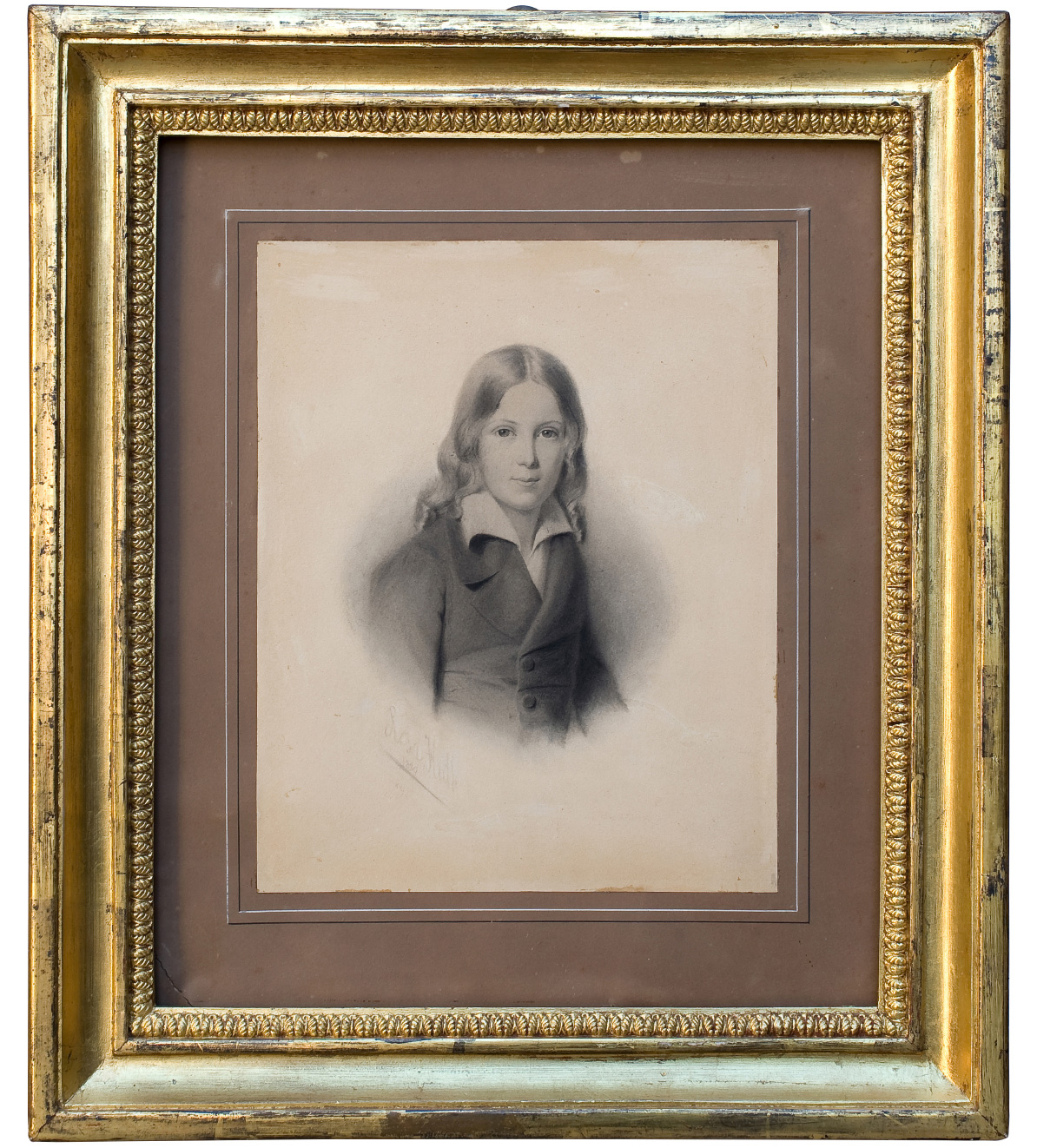 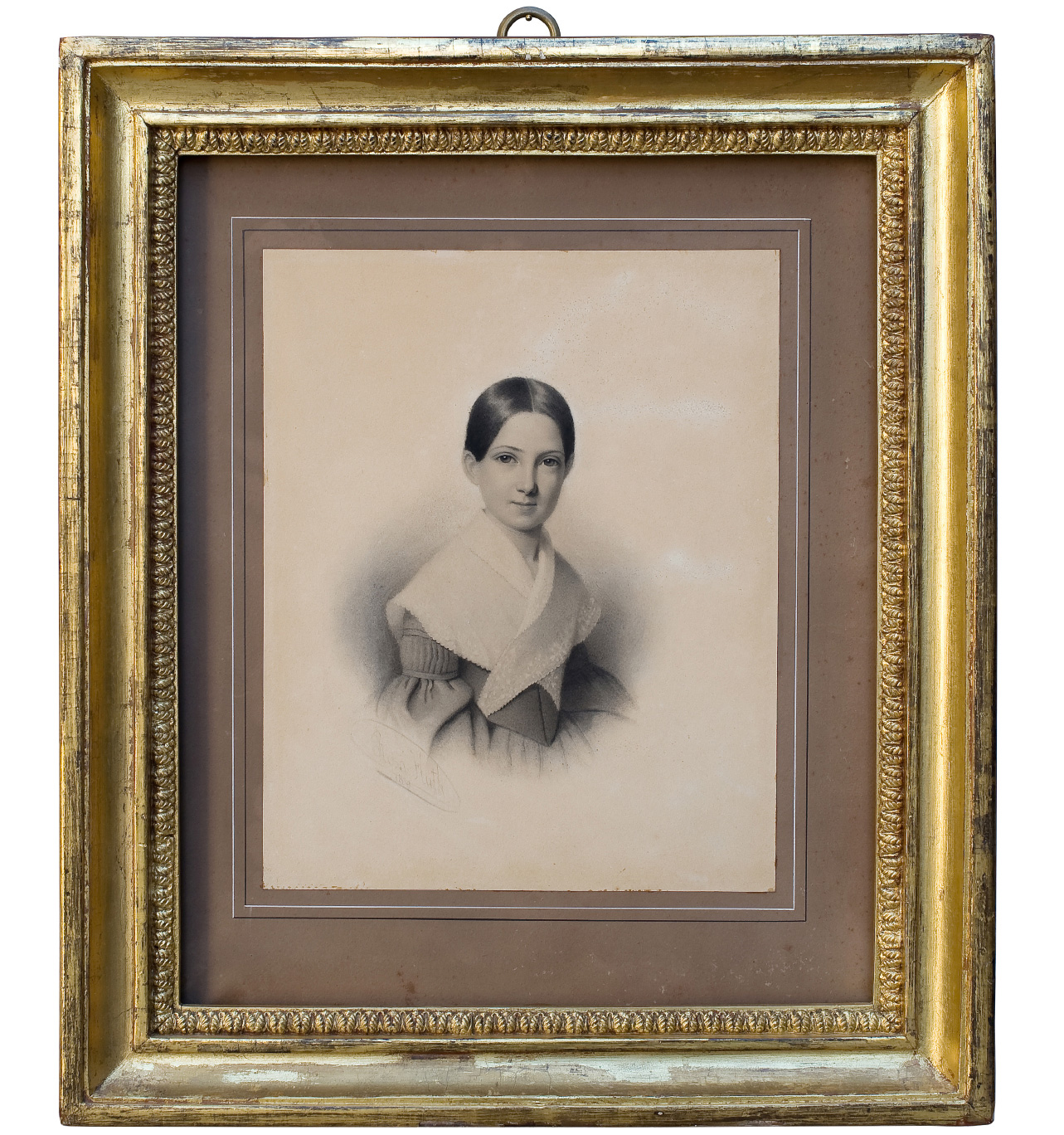 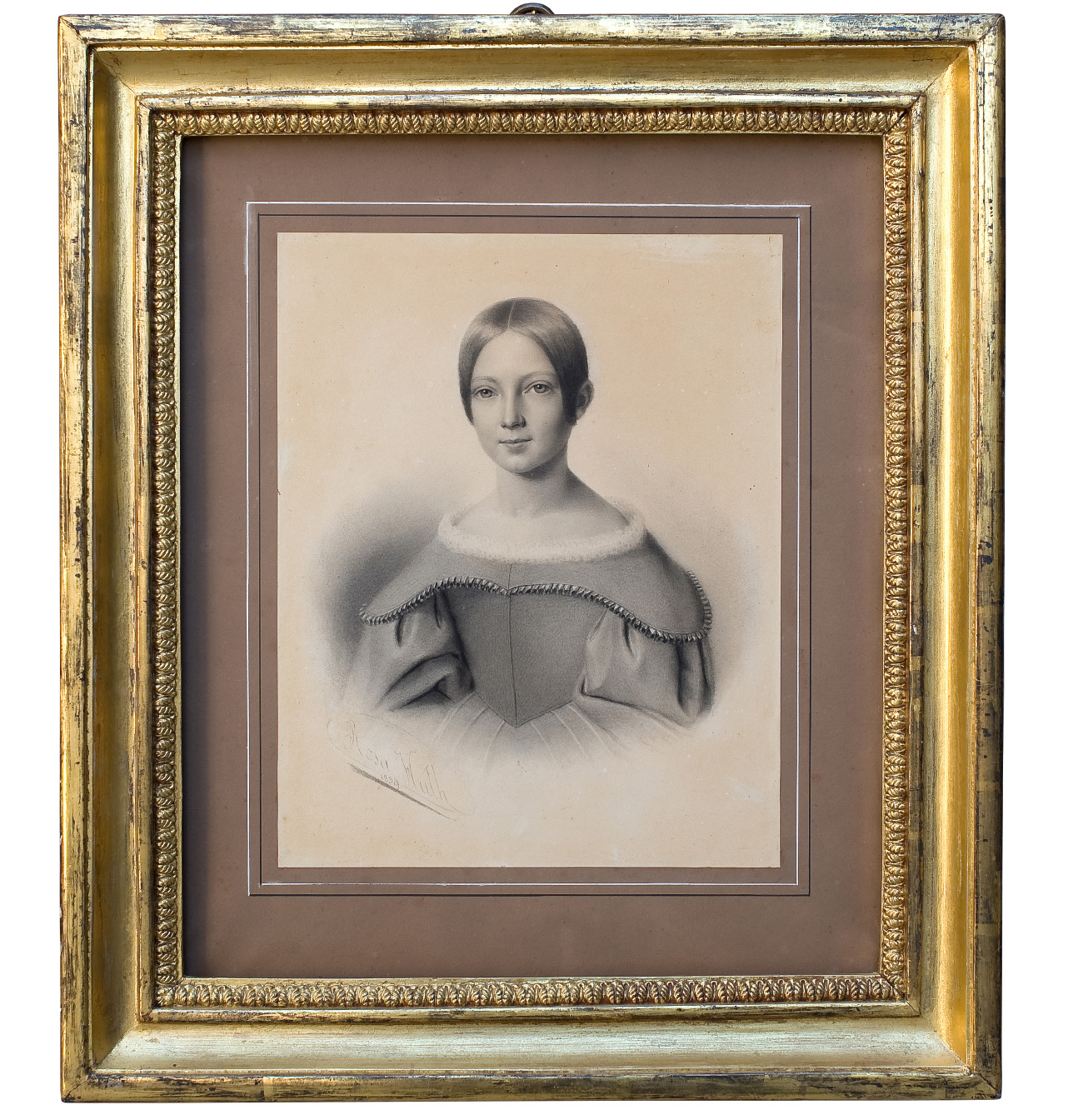 The painter Conrad L’Allemand trained at the Academy of Fine Arts in Vienna. In the years 1830-38 he was active as a popular portraitist of the Frankfurt bourgeoisie. He moved to Hanover in 1838, where he was accepted into court circles and received numerous honours for his work. Through his royal connections he also gained access to the court of Queen Victoria in London.

The portraitist and flower painter Rosa Huth studied under Conrad L’Allemand from 1831–33. Both painters were members of the so-called “Kronberger Malerkolonie”. In the 1830s, Huth’s portraits were highly sought-after in fashionable Frankfurt circles. Her portrait of Großherzogin Marie von Mecklenburg-Strelitz earned her recognition and she acquired the unofficial title of non-resident court painter. 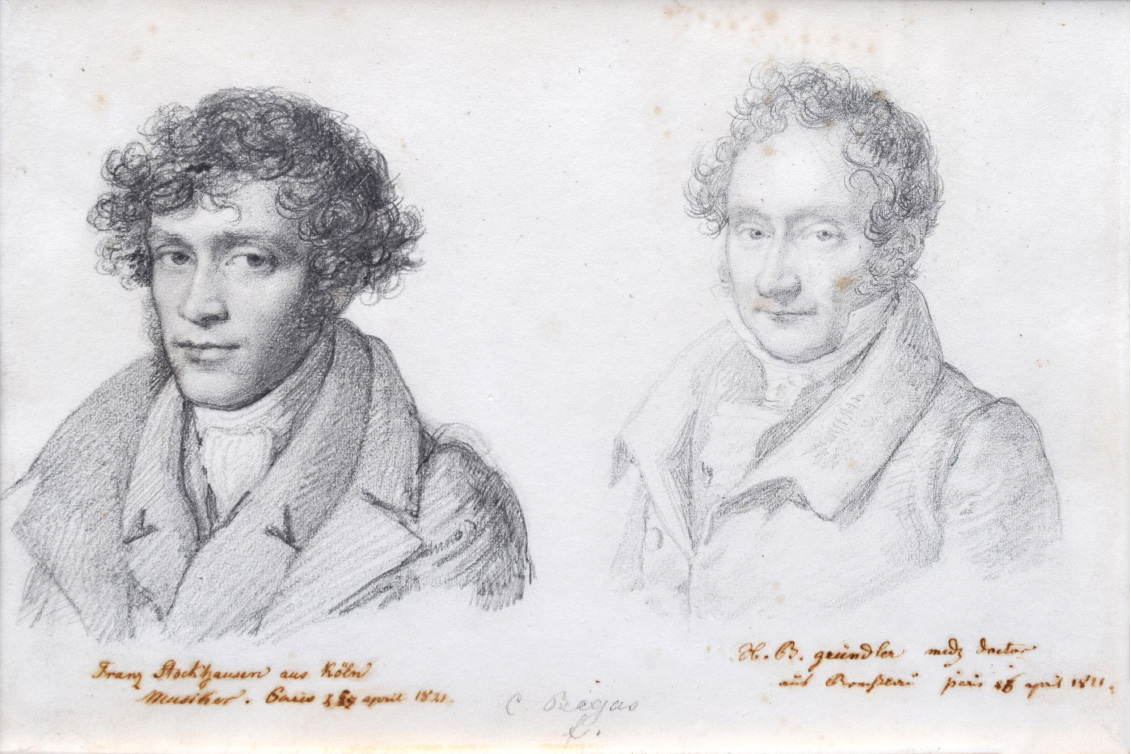 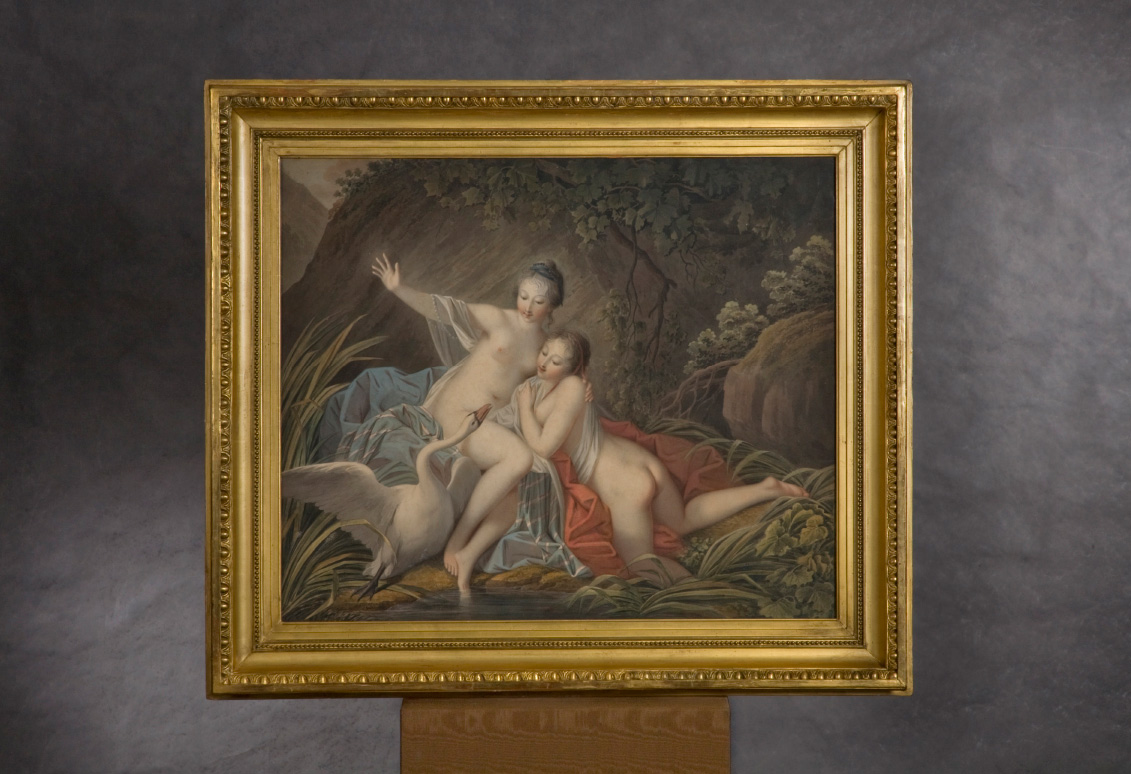 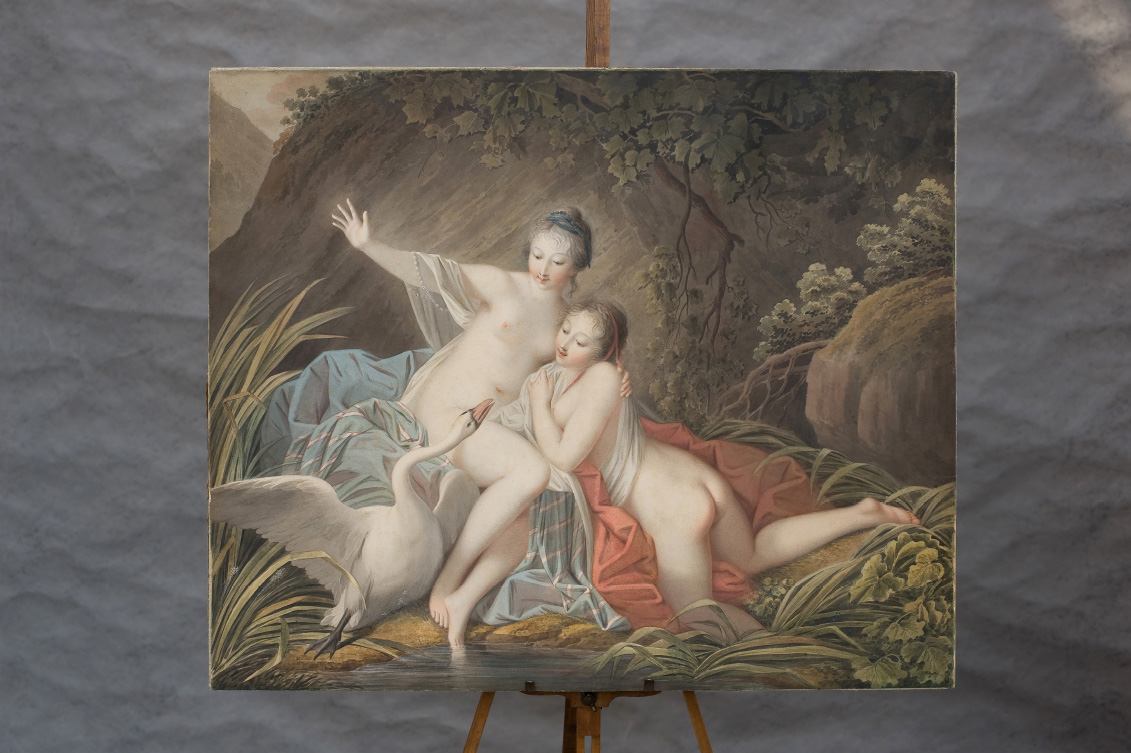 Leda, Althaia and the Swan (after François Boucher)
Watercolour on paper, Bern c.1810

Dinkel exhibited watercolours after Raphael, de la Haye and Boucher at the Kunst und Industrieausstellung in Bern in 1810. He also participated at the Kunst und Industrieausstellung in the years 1818, 1824 and 1830. His work was popular with affluent Grand Tourists who liked to be portrayed by him decked out in traditional Swiss costume. A well-known example is his portrait of Joséphine de Beauharnais executed in 1810 depicting her in traditional Bernese costume. 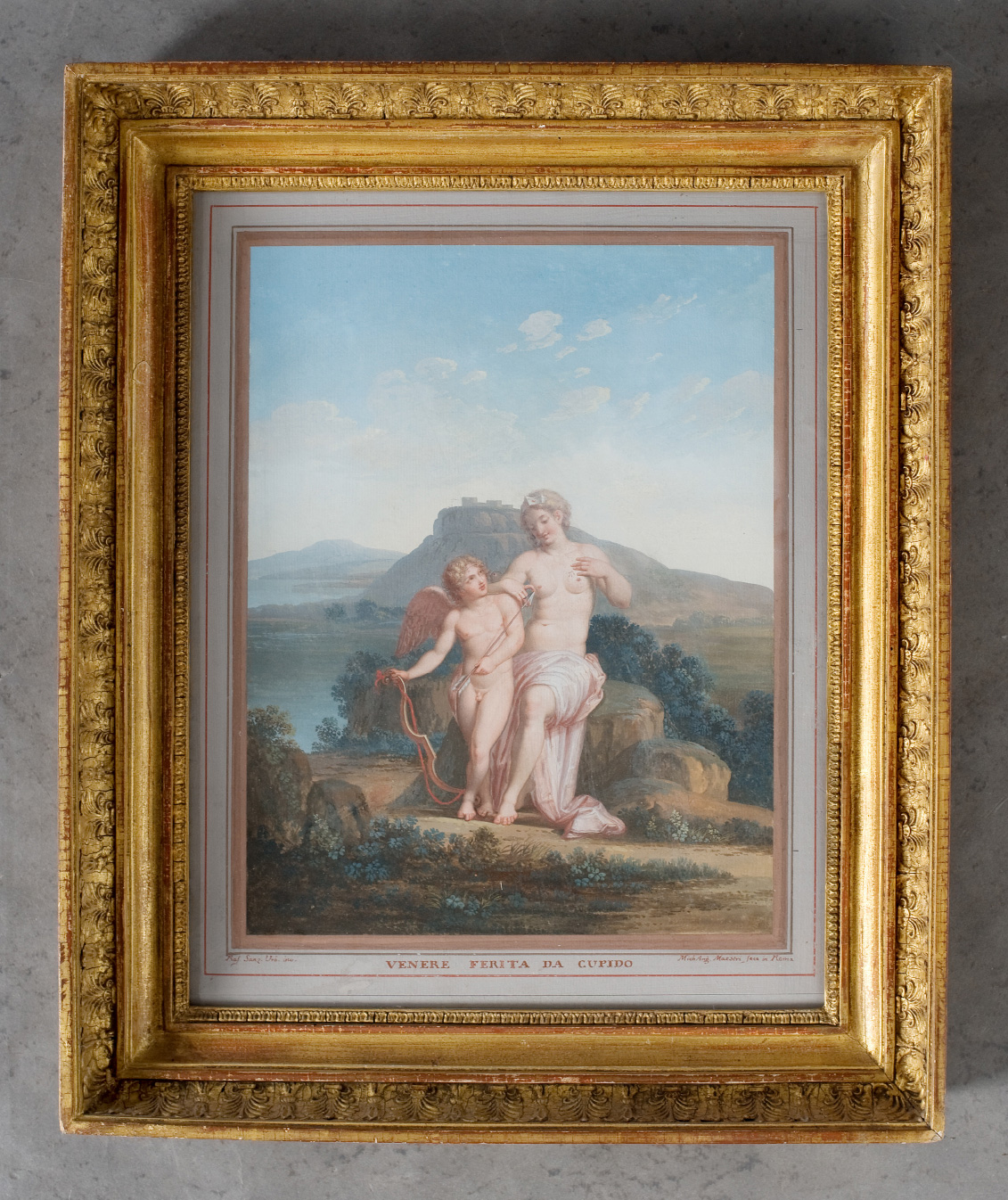 The Italian artist Michelangelo Maestri specialised in striking compositions inspired by motifs drawn from the antique frescoes discovered in Pompeii and Herculaneum. He also produced very fine work after designs by Raphael and his pupil Giulio Romano. Maestri was a prolific painter whose work was widely appreciated. Wealthy northern European Grand Tour travellers were avid buyers of his paintings, which they regarded as sophisticated mementos of the Tour. 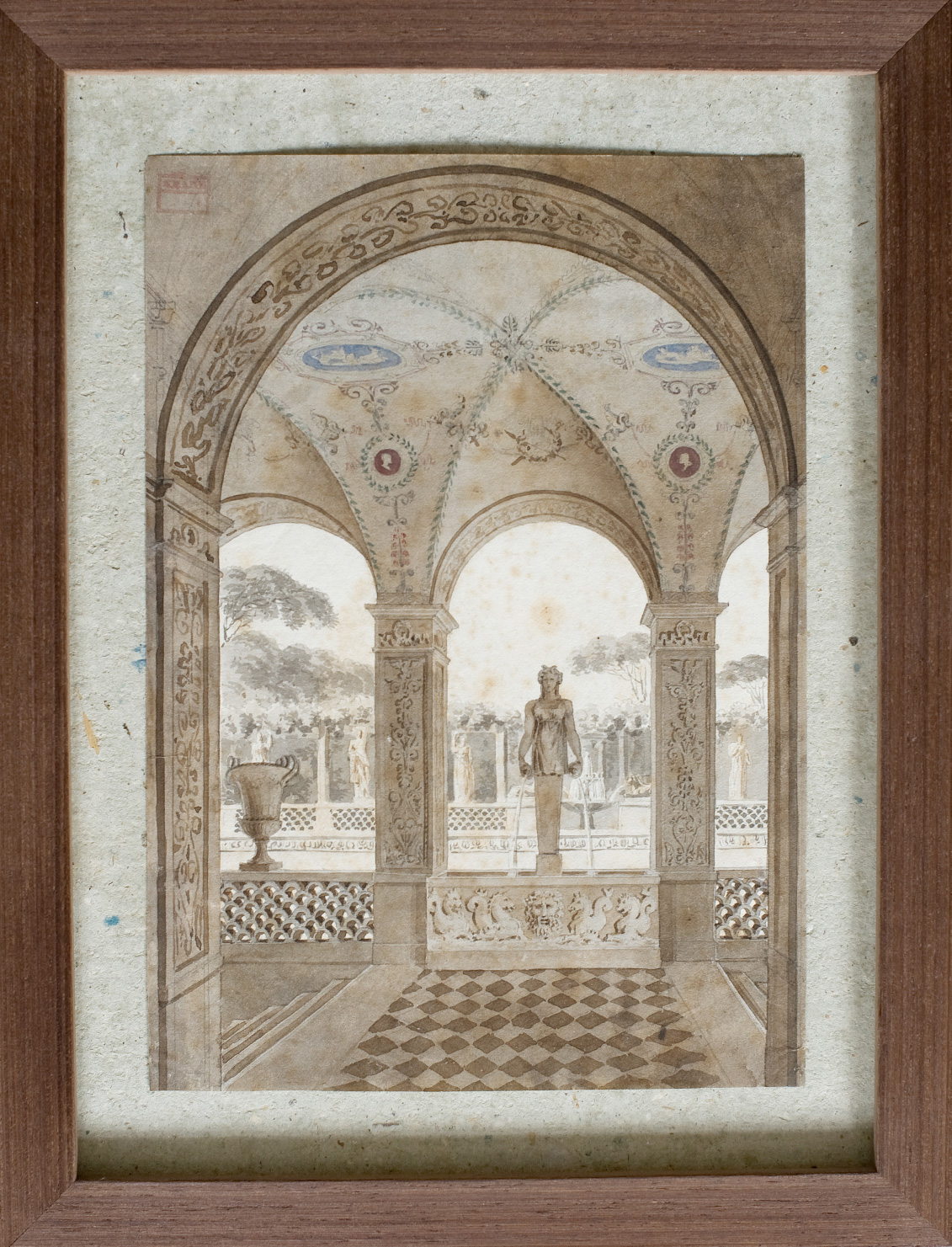 View into the Loggia of the Villa Giulia (Rome)

Rome, before 1790
Watercolour over pencil

On the verso of the former mount inscribed (by Peter Joseph Krahe?) in pen and black ink: “Von meinem seligen Vater” [from my deceased father] and numbered “108”. Recto with a later inscription reading: “Krahe Mappe 1”. 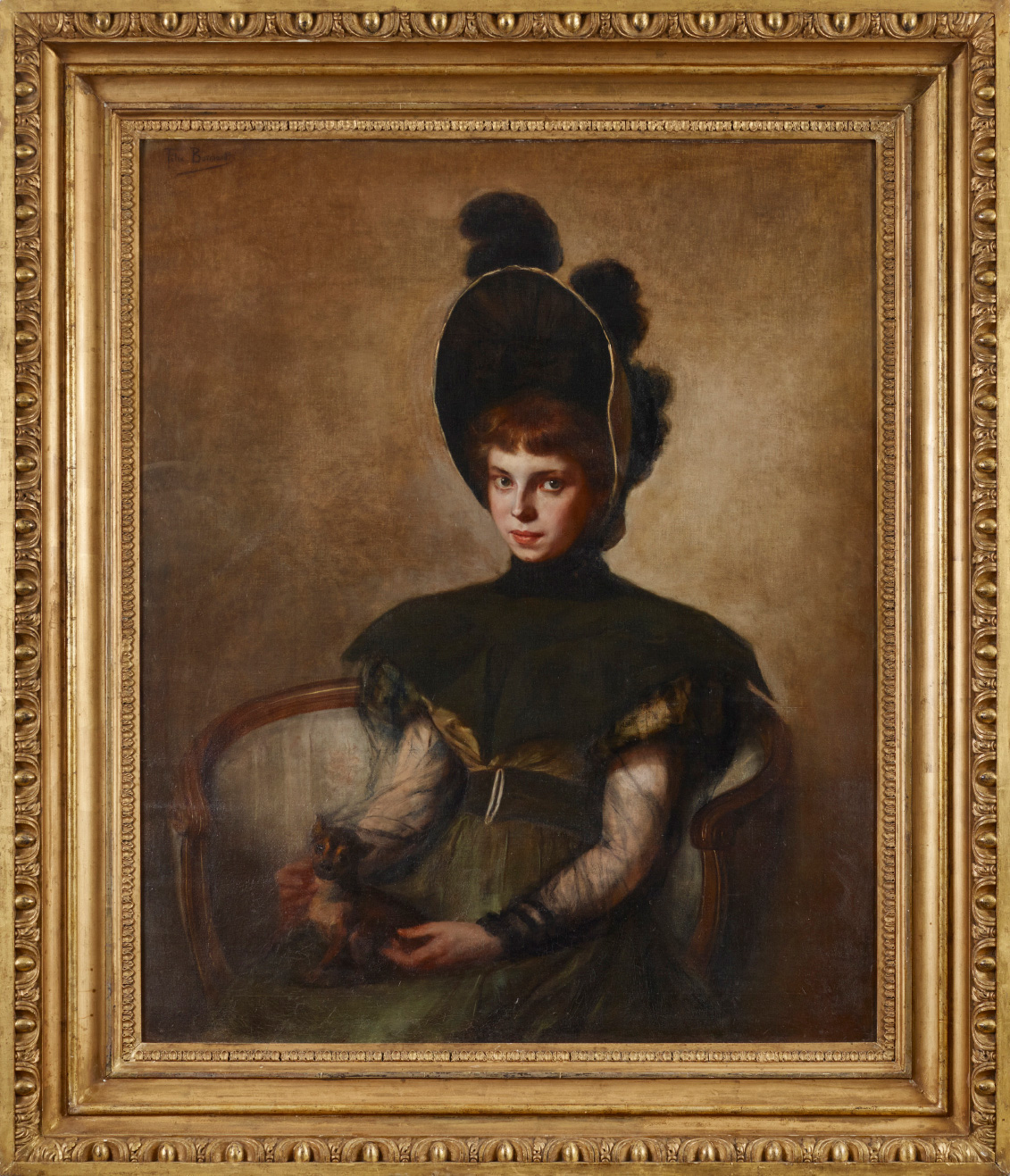 Kunstsalon Emil Richter, Dresden (bearing the stamp on the verso)

Felix Borchardt was born in Berlin in 1857, the son of Max Siegfried Borchardt, a private banker and diplomat. He trained at the Berlin Academy of Arts and later travelled extensively in southern Europe, Turkey and north Africa. He was in Madrid in 1887 and visited the Museo del Prado, where he met a fellow artist – the American Impressionist painter Lydia (Lilla) Cabot Perry (1848-1933) who was on a study trip to Europe. It is likely that their meeting and her exposure to Borchardt’s artistic thinking was to have a formative influence on her own work. The painting “The Black Hat”, executed in 1914, depicting a seated woman in a large black hat, strongly recalls Borchardt’s “Portrait of Baroness von Hausen”.

Borchardt moved to Dresden in 1893, marrying in the same year. His daughter, born in 1894, was the writer Elisabeth Castonier. Borchardt joined the Dresden Secession in 1897. In 1899, the family settled in Paris, where he achieved a major breakthrough and demand for his work flourished. He was an active member of the artistic community and his newly-built property quickly became a popular meeting place for artists, musicians and critics. He was awarded the Légion d´Honneur for his services to French painting in 1913.

One of his most talked-about paintings was the “Portrait of Kaiser Wilhelm II” which made world headlines from Sydney to Washington and London to Budapest. The painting was shown at the Salon de la Sociéte Nationale des Beaux-Arts in 1906 – discreetly guarded by members of the secret service for fear of politically motivated attacks.

Paintings by Borchardt are held in museums in Berlin, Krefeld, Amsterdam, Brussels, Paris and Rome and in numerous private collections.

We are grateful to Dagmar Frings for her valuable assistance. 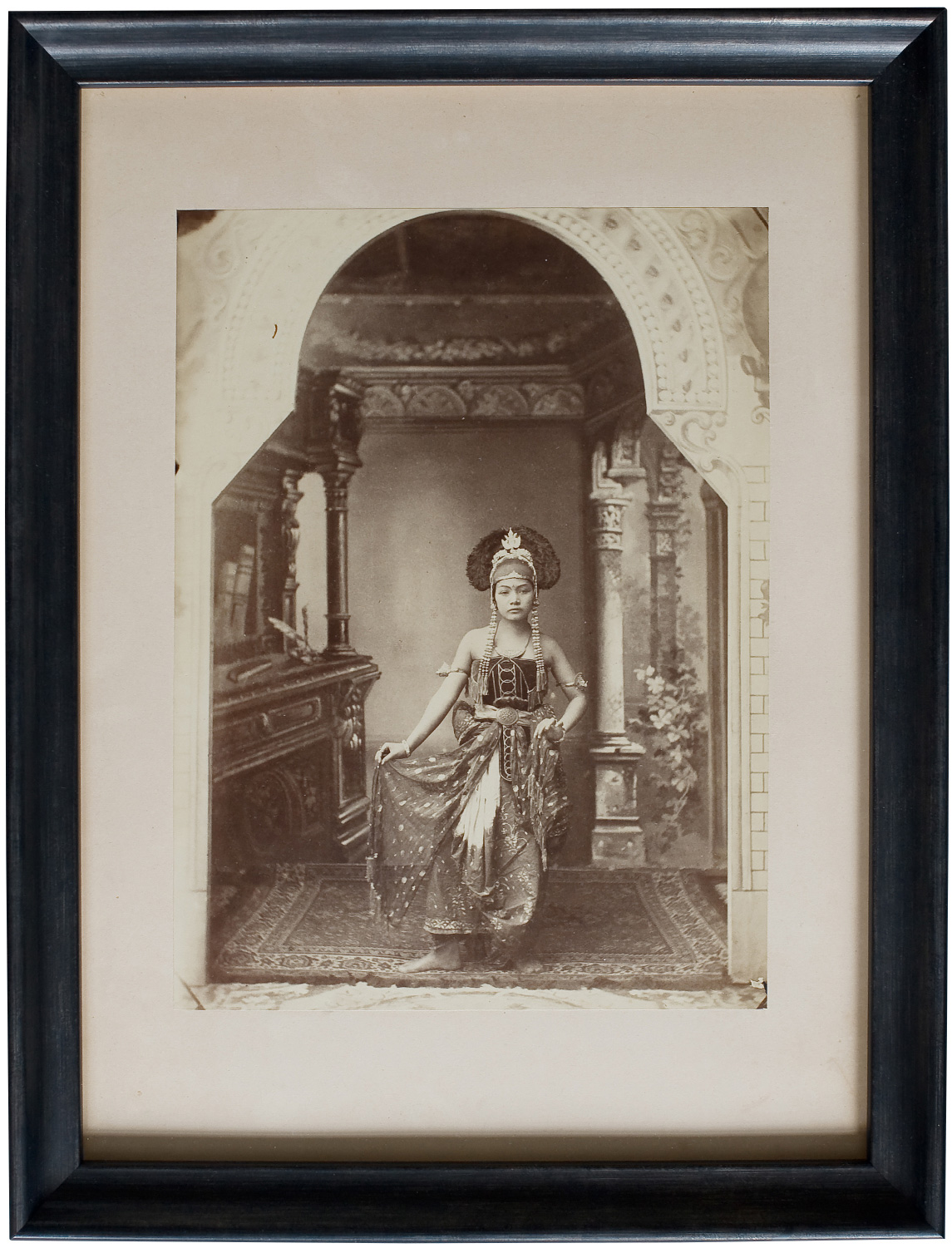 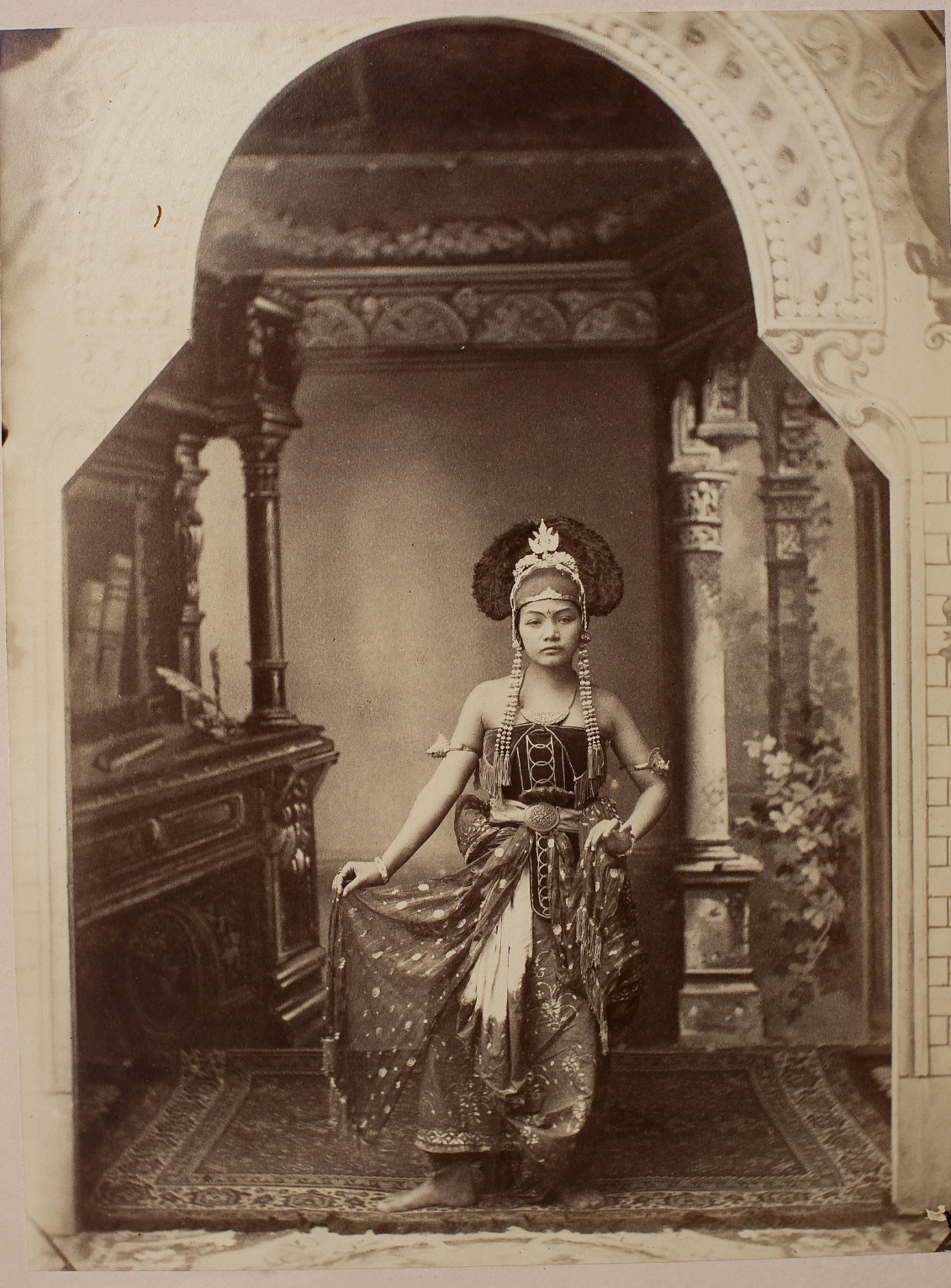 For the same motif, see KITLV Leiden (NL), University of Leiden, KITLV A750 (old album J 53). [KITLV-Jakarta is a research institute for the study of southeast Asia and the Caribbean] 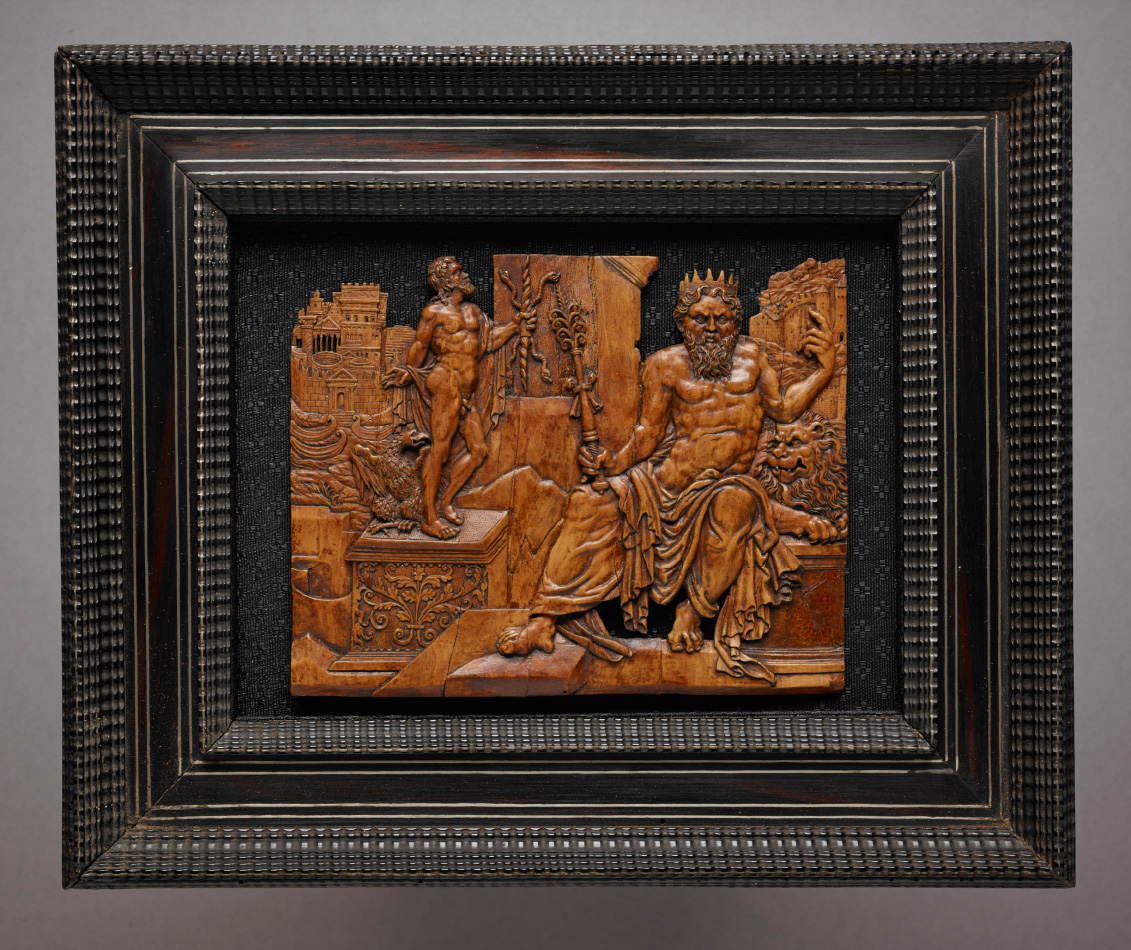 On the right: Marcus Aurelius Carausius, military commander and self-declared Roman Emperor of Britain in the 3rd century AD, with a crown and sceptre possibly symbolizing the fruitful period of his reign over Britain. The town above representing “Londinium”, symbolized by the lion
On the left: Rome with the Colosseum, Trajan’s column and the Tiber with boats; Olympian Jupiter seated on a pedestal decorated with acanthus, bearing a thunderbolt and with an eagle symbolizing Rome 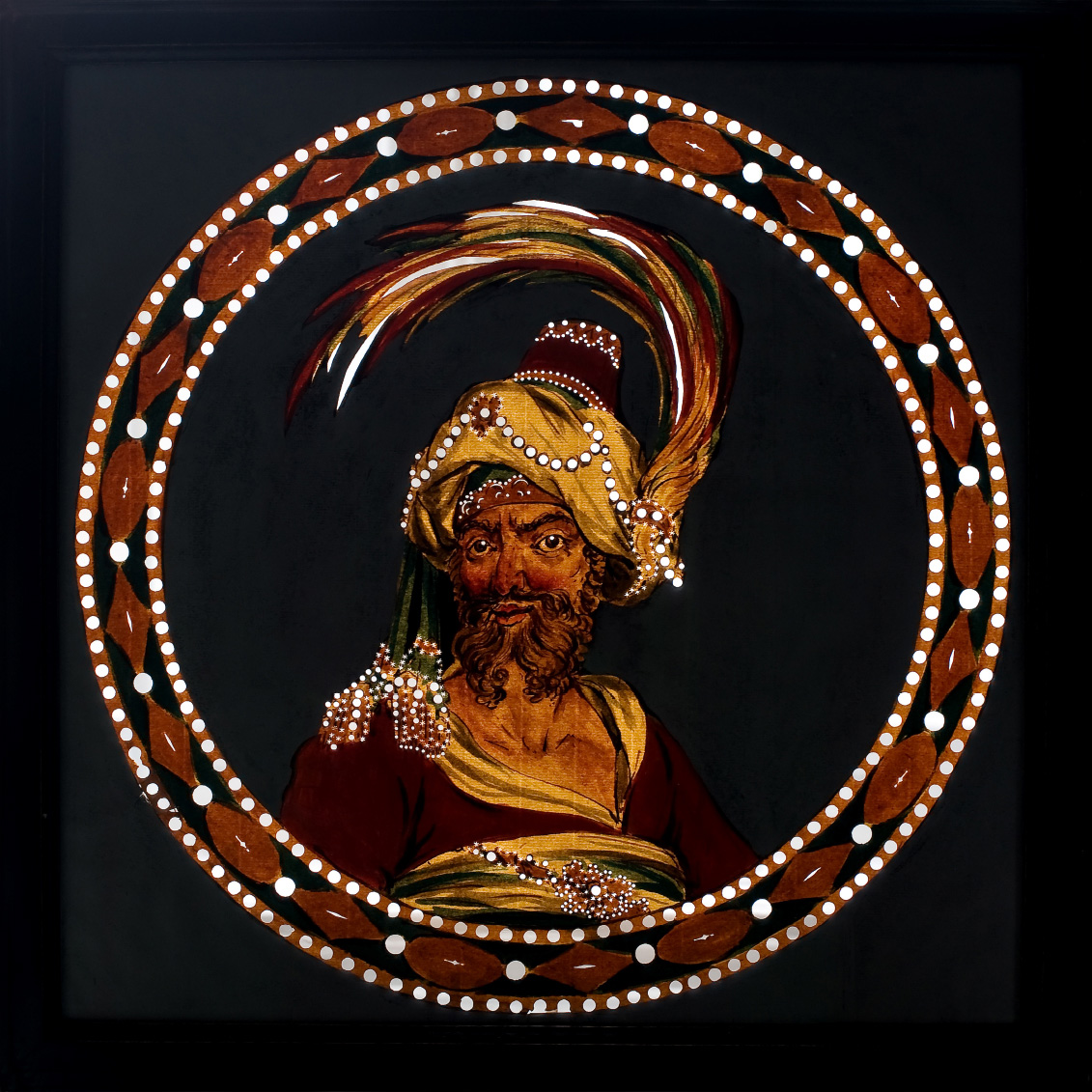 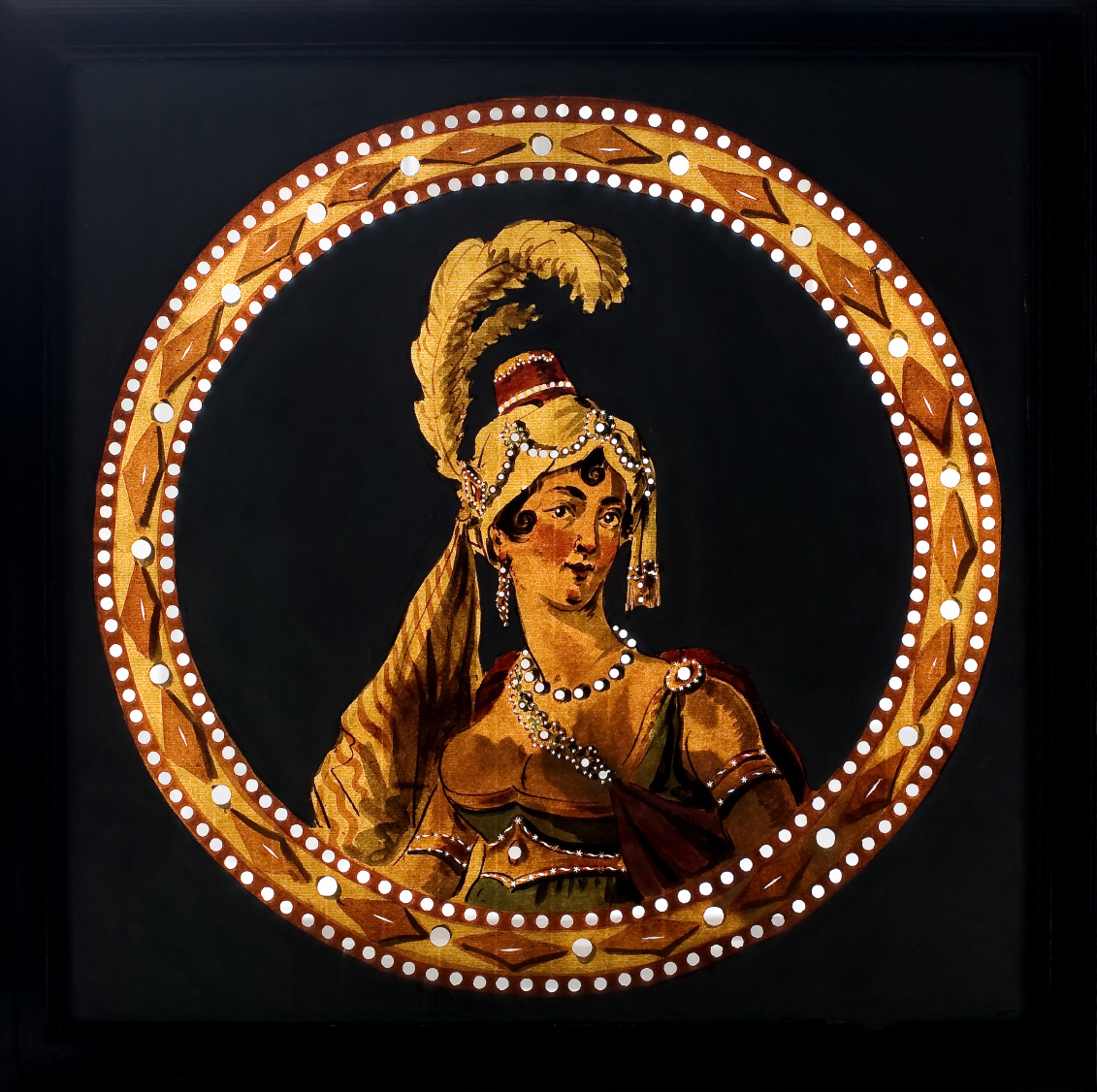 A pair of drawings
Gouache and watercolour
On paper, tiny round holes punched out (illumination view)

This site uses cookies. By continuing to use the site, you agree to the use of cookies.

We can request cookies that are set on your device. We use cookies to tell us when you visit our websites, how you interact with us, improve your user experience and adapt your relationship with our website.

Click on the different category headings to learn more. You can also change some of your settings. Note that blocking some types of cookies may affect your experience on our websites and the services we can offer.

These cookies are absolutely necessary to provide you with the services and functions available on our website.

We fully respect it if you want to reject cookies. In order to avoid that you are asked for cookies again and again, please allow us to save a cookie for your settings. You can unsubscribe at any time or allow other cookies to make full use of our services. If you reject cookies, all cookies set on our domain will be removed.

We will provide you with a list of cookies stored on your domain by your computer. For security reasons, we cannot display cookies that are stored by other domains. You can view this in the security settings of your browser.

These cookies collect information that helps us to understand how our website is used and how effective our marketing measures are. We can also use the knowledge from these cookies to adapt our applications to improve your user experience on our website.

If you do not want us to track your visit to our website, you can block this in your browser here: